Plants have a seemingly effortless skill – turning sunlight into energy – and scientists have been working to artificially emulate this photosynthesis process. The ultimate benefits for renewable energy could be huge – and a new approach based on ‘photosheets’ could be the most promising attempt we’ve seen so far.

The new device takes CO2, water, and sunlight as its ingredients, and then produces oxygen and formic acid that can be stored as fuel. The acid can either be used directly or converted into hydrogen – another potentially clean energy fuel.

Key to the innovation is the photosheet – or photocatalyst sheet – which uses special semiconductor powders that enable electron interactions and oxidation to occur when sunlight hits the sheet in water, with the help of a cobalt-based catalyst.

No additional components are required for the reaction to occur, and it’s fully self-powered.

“We were surprised how well it worked in terms of its selectivity – it produced almost no by-products,” says chemist Qian Wang, from the University of Cambridge in the UK.

“Sometimes things don’t work as well as you expected, but this was a rare case where it actually worked better.” 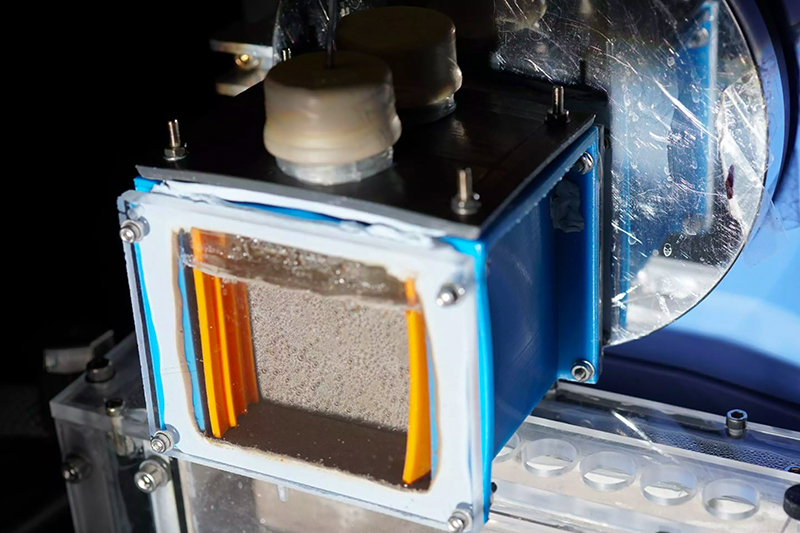 The device in action. (University of Cambridge)

While the prototype photosheet only measures 20 square centimetres (3 square inches), the scientists who invented it say it should be relatively easy to scale up without incurring huge costs.

Ultimately, they think these sheets could be produced in large arrays, similar to those on solar farms. What’s more, the resulting formic acid can be stored in a solution, and from there converted into different types of fuel as needed.

It achieves something that isn’t always guaranteed in conversion systems like this – a clean and efficient process without any unwanted by-products. Any extra waste produced has to be dealt with, which can negate the positive effects of the initial reaction.

“It’s been difficult to achieve artificial photosynthesis with a high degree of selectivity, so that you’re converting as much of the sunlight as possible into the fuel you want, rather than be left with a lot of waste,” says Wang.

A team from the same lab was also responsible for developing an ‘artificial leaf’ material in 2019. While the new photosheet behaves in a similar way, it’s more robust and easier to scale up – and it produces fuel that’s more straightforward to store, too (last year’s system created syngas).

That doesn’t mean the new photosheet is ready to go commercial just yet: The researchers need to make the process a lot more efficient first; they are also experimenting with different catalysts that may be able to produce different solar fuels.

The need for a full transition to clean energy is more urgent than ever, but we’re encouraged by how many projects are in the pipeline. However, as is the case with this new process, figuring out the science is just the start of producing a fuel that will work practically.

“Storage of gaseous fuels and separation of by-products can be complicated – we want to get to the point where we can cleanly produce a liquid fuel that can also be easily stored and transported,” says chemist Erwin Reisner, from the University of Cambridge.

“We hope this technology will pave the way toward sustainable and practical solar fuel production.”

The research has been published in Nature Energy.

The Remains of This Recently Found Ancient Structure Are Even Older Than The Pyramids
No One Is Quite Sure Which Species This Creepy ‘Nightmare’ Shark Belongs to
Engineers Gave a Car a Pair of Eyes to Make Future Roads Safer For Pedestrians
Watch a Tiny Robot Blob Transform Into Even Tinier Bits to Squeeze Through Cracks
Dinosaurs Were Already on Their Way Out Before Asteroid Hit, Another Study Finds