When silkworms spin their cocoons so they can transition from caterpillar to moth, they produce one of the most valuable fibres in the world. Now a team of researchers has edited silkworm genes so that, in addition to producing their own silk, they spin that of another creature – the golden orb weaver spider.

Spider silk is incredible stuff. It has amazingly high tensile strength and ductility, which also makes it amazingly tough. It’s stronger than steel, in fact, but very flexible and lightweight, which means it potentially could be used for a whole range of interesting applications.

One potential solution was splicing spider genes into goats so that the animals would produce spider silk proteins in their milk. But it seemed a somewhat roundabout way to go about it. So researchers in China recruited a creature that produces silk of its own: the silkworm.

They used a gene-editing technique called Transcription activator-like effector nucleases (TALEN) to change the DNA of the silkworms.

It’s a little like CRISPR, which acts a bit like a knife – finding a particular type of DNA, and cutting it out. (You can see a video of it in action here.)

In addition to cutting DNA, TALEN carries an agent that also binds in new DNA. So the researchers were able to splice DNA from golden orb-weaving spiders into the DNA of the silkworms.

They’re not the first scientists to try something like this. In 2012, researchers in the US published a paper describing how they had managed to produce silkworms that spun spider silk using a gene-editing technique called PiggyBac, which is a sort of genetic cut-and-paste. The resulting silk had a spider silk content of 2-5 percent. 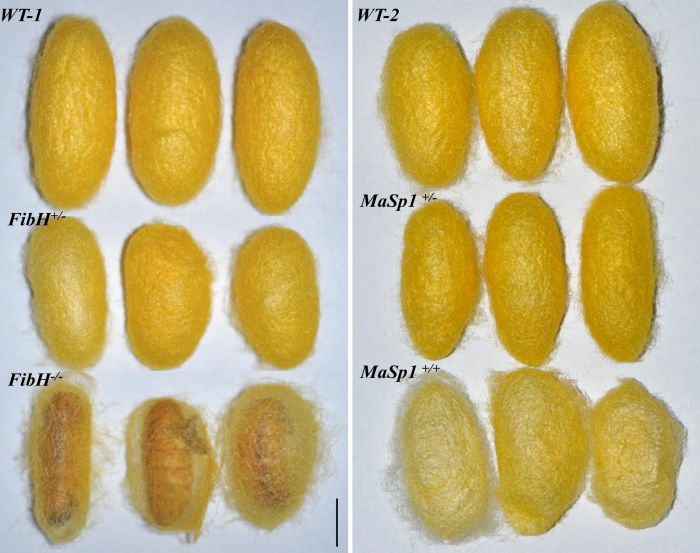 The Chinese researchers report that their caterpillars also produced silk that was a mixture of silkworm silk and spider silk. It wasn’t as strong as pure silkworm silk, but it was way more stretchy. However, they managed to bring the spider silk content up to 35.2 percent – improving the previous result seven-fold.

That doesn’t mean we’re necessarily on the verge of commercially viable spider silk, though. Researchers have also tried splicing spider DNA into alfalfa (which comes with a host of problems, not the least of which is FDA approval) and E. coli, but as yet neither has proven apt as a solution to upscaling spider silk production.

However, the silkworm technique did have another benefit over these other methods: the silk was ready for use as soon as it was spun by the insect; it did not have to be extracted or processed.

And it’s a process that, with further refinement and experimentation, could be adapted in new ways we haven’t even discovered yet. The researchers note that this technique could result in the mass production of spider silk – which in turn could lead to the development of new silkworm-produced biomaterials.

The team’s research has been published in the journal PNAS.

There’s Another Way To Use Boomerangs That Most People Don’t Know About
Scientists Just Broke The World Record For The Most Powerful Stable Magnetic Field
‘Gifted’ Dogs Seem to Have This One Characteristic in Common
Jupiter’s Ice Moon Europa Probably Has Upside Down, Underwater Snow
Hidden ‘Hunger Stones’ Reveal Drought Warnings From The Past