In a matter of minutes, one nuclear-armed nation can level dozens of cities, spread radioactive fallout for hundreds or thousands of miles, and wreck Earth’s climate.

Most people are familiar with the basics: Slap together enough uranium or plutonium and – kaboom! – you have a nuclear blast.

But the details of how these complex devices are made, delivered, and controlled can make the difference between keeping the peace and sparking a cataclysm.

It doesn’t help that there’s more than 60 years’ worth of convoluted terminology surrounding the complex policies and politics of nuclear weapons.

There are words like isotopes, fission, tritium, and yellowcake; abbreviations such as HEU, LEU, SSBN, and CVID; and the subtle yet striking difference between uranium-235 and uranium-238.

As President Donald Trump and his administration try to continue talks with North Korea over its nuclear weapons program – an effort could take years to pan out and is guaranteed to get very, very complicated – we’ve defined some of the most important (and misunderstood) words, phrases, and acronyms here.

A conventional explosive device rapidly burns up a chemical to cause a blast. A nuclear weapon, meanwhile – such as a bomb or warhead – splits atoms to release millions of times more energy than chemical reactions.

Yet the term “nuclear weapon” can also refer to a vehicle that’s able to deliver a nuclear attack, such as missiles, fighter jets, stealth bombers, and truck-like mobile launchers. (If flying dinosaurs were alive today and trained to drop nuclear bombs, the creatures may be considered nuclear weapons.)

During weapons inspections like the ones between the US and Russia, nuclear warheads are actually concealed with a piece of cloth; it’s the vehicles, missiles, and launch or bombing bays that are the focus. Without them, a warhead can’t get anywhere quickly.

An ICBM is a space rocket that can launch a destructive device on top and carry it from one nation to another in a high arc.

Technically speaking, an ICBM is any missile capable of delivering one or more warheads from more than 3,415 miles (5,500 kilometres) away. The missile silos in the US in which they’re stored are sprinkled around the country, with most stationed in middle America.

As of 2018, the US has about 400 ICBMs with warheads and 400 more missile-ready warheads in storage, while Russia has 318 ready-to-launch ICBMs and 1,138 total missile warheads (some missiles carry more than one). 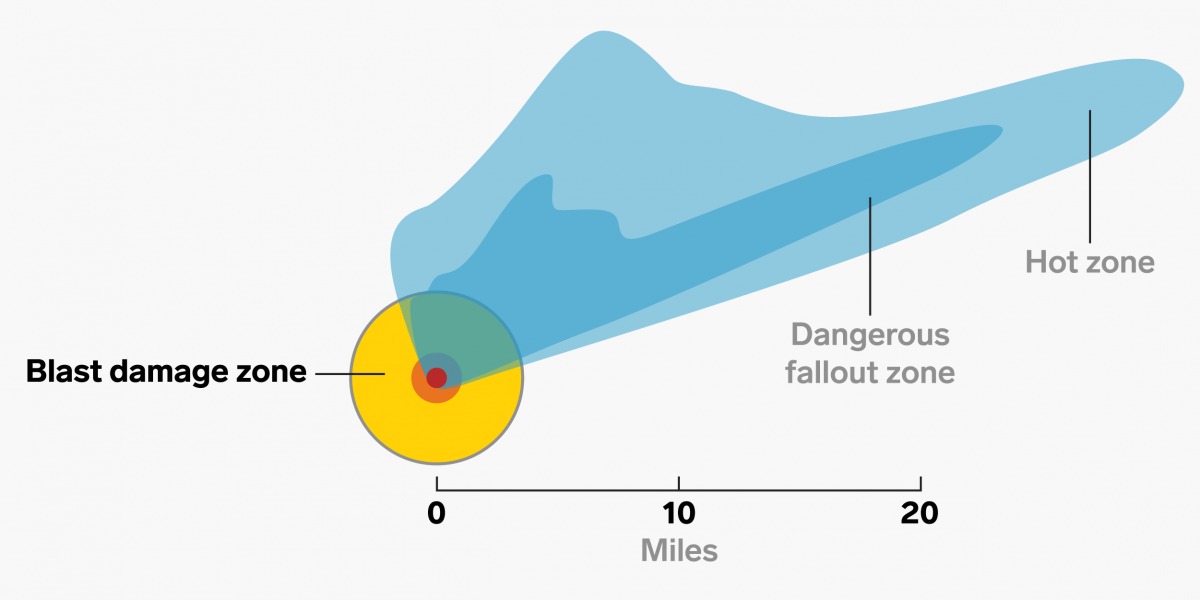 A 10-kiloton nuclear explosion near the ground. (Jenny Cheng/Business Insider)

Fallout describes the dangerous leftovers of a nuclear weapon: a cloud of dust, dirt, sand, pebbles, and bits of debris that an explosion has irradiated.

Bombs or warheads detonated near the ground vastly increase the amount of fallout by sucking up soil and debris, irradiating it, and spreading it for dozens if not hundreds of miles.

Very fine particles can circle the globe and be detected by special aeroplanes. 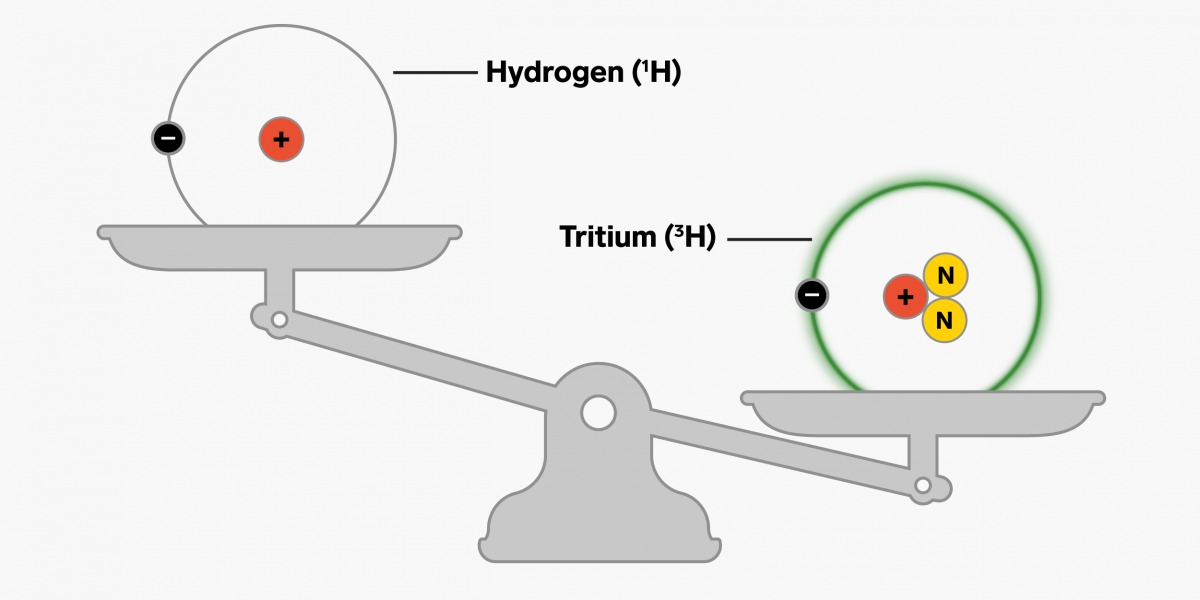 Each element on the Periodic Table has a unique chemical identity but can have different weights, or isotopes.

For example, hydrogen is the smallest atom and is usually made of just one positively-charged proton in its nucleus, or core. Its shorthand name, H-1, specifies its atomic weight.

If a chargeless neutron gets added, you get the isotope deuterium, or H-2. Add two neutrons and you have the isotope tritium, or H-3.

All three forms of hydrogen have nearly identical chemistry and can, say, bond with oxygen to form water. But their nuclear properties differ significantly: deuterium and tritium can fuel thermonuclear explosions because their extra neutrons can encourage fusion of hydrogen atoms into helium atoms (which have two protons) far more easily than H-1 alone. 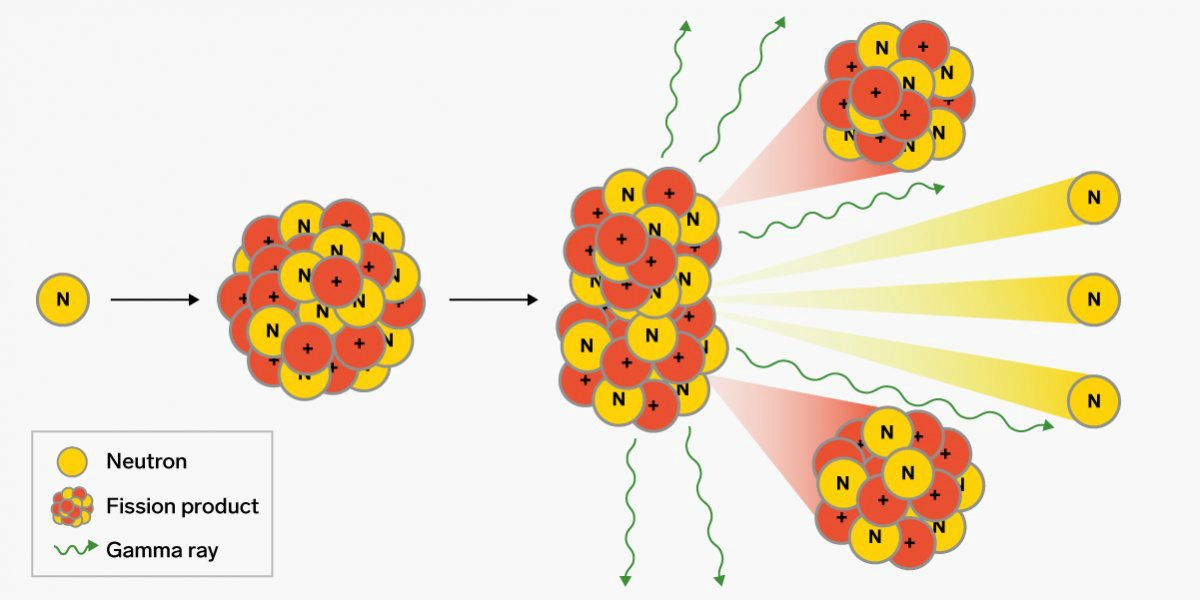 An atom that can undergo fission is said to be fissile. (Jenny Cheng/Business Insider)

Fission is another word for splitting atoms, and it is what makes nuclear bombs and energy work.

During fission, the nucleus or core of a heavy atom absorbs a flying neutron with the right speed or energy.

This destabilizes the nucleus, which splits into pieces. (Early nuclear scientists visualized the process of a fissioning nucleus as a liquid droplet being hit with just enough energy to resonate or vibrate itself apart.)

Each fission creates new, lighter-weight atoms called fission products. Some may be stable, though many are unstable and radioactively decay.

Neutrons can also emerge from each fission, as can extremely high-energy photons of light called gamma rays.

Adding up all the parts shows a very small loss of mass. Per Einstein’s equation, E=mc2, matter – typically about 0.1 percent – is converted to energy carried by the neutrons, gamma rays, and fission products.

Uranium is a dense element and a key ingredient in nuclear weapons production. It occurs naturally in ores and minerals and has a few important isotopes.

U-238 makes up about 99.27 percent of natural uranium and is inert. Less than 1 percent of the uranium in ore is U-235 – the “active ingredient” that can be used for nuclear reactor fuel or bombs because it’s so fissile, or able to fission.

Although plutonium (which we’ll describe in a moment) is now the favoured bomb-making material, U-235 was used in the Little Boy bomb that the US dropped on Hiroshima in 1945.

U-233 is another isotope that’s weapons-ready, but it’s only made inside special reactors that no longer exist – for now. 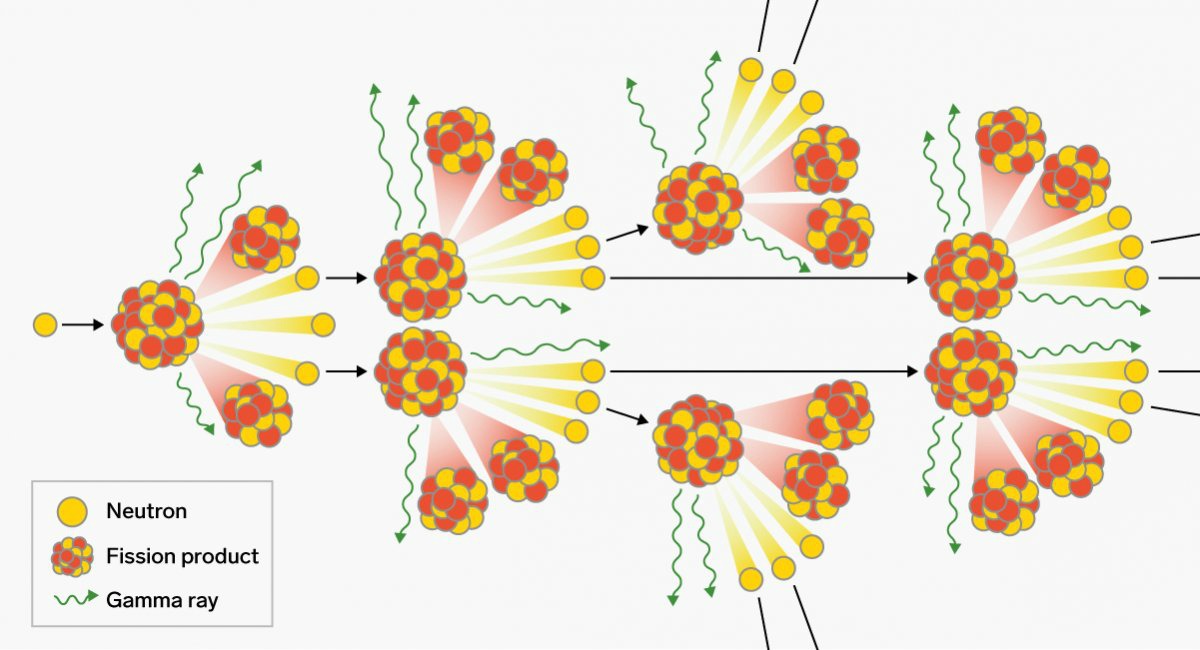 What makes U-235 so special is that, in addition to being relatively easy to fission, it spits out two or three neutrons in the process.

These flying neutrons often have the right energy to be captured by other U-235 atoms and cause them to fission, too. If enough fissile atoms are close enough together and being hit with enough neutrons, this can lead to a nuclear chain reaction.

A special flavour of this is called criticality: when the number of neutrons absorbed equals the number produced, and thus the reaction sustains itself.

Nuclear reactors control this process with a number of safeguards. Nuclear weapons, however, exploit the possible runaway effect of criticality to explosive ends.

Plutonium is a metallic element that doesn’t occur in nature, and it most often refers to the isotope Pu-239: the go-to material for modern nuclear weapons.

Only nuclear reactors can make Pu-239. They do so by irradiating fertile U-238 with neutrons. The plutonium can then be separated from the uranium, concentrated, and formed into weapons pits – the cores of nuclear weapons.

Pu-239 can more easily trigger a nuclear explosion than uranium, and with less material; as little as about 10 lbs (4.5 kilograms) can be enough.

Plutonium-240 is an unwanted and pretty radioactive byproduct of making Pu-239. It can make bombs prematurely explode and fizzle because it’s fairly radioactive.

Pu-238 is a byproduct of Cold War weapons production that generates a lot of warmth and powers NASA’s most adventurous robots in the cold, dark depths of space.

Yellowcake is a powder of uranium oxide that’s made by leaching uranium from natural ores and chemically treating it. Despite its name, it’s most often brown or black in colour.

The powder is a concentrated form of natural uranium – about 99.72 percent U-238 and 0.72 percent U-235. It’s an important commodity because it can be stockpiled and later processed to extract and enrich U-235.

The U-235 and U-238 isotopes are chemically identical and nearly the same weight – so they’re very hard to separate. However, one of the easiest ways to separate uranium is a centrifuge.

The process starts with converting yellowcake into uranium hexafluoride (UF6), then heating the compound into a gas. The gas then enters a centrifuge: a tall, hollow tube that spins faster than the speed of sound.

The rotation pulls heavier U-238 toward the centrifuge’s outer wall while leaving more U-235 near the middle.

Cascades of centrifuges – one linked to another in long chains – further separate and concentrate each isotope.

U-235-rich gas moves through an “upstream” line of centrifuges, growing until a desired level of concentration is reached. Meanwhile, U-238 moves “downstream” until it’s mostly depleted of U-235.

It can take thousands of centrifuges spinning for an entire year to enrich enough U-235 for a weapon.

Highly enriched uranium is any amount of uranium with 20 percent or more U-235 – the kind that can spur a nuclear detonation.

HEU with a concentration of 85 percent or more U-235 is considered “weapons-grade,” since that is enough to cause a large and efficient nuclear explosion.

But it’s rarely used anymore: It most often goes into special reactors that power naval ships and submarines, can make plutonium, or create medically important isotopes (such as molybdenum-99, which can help diagnose certain heart diseases and cancers).

Low-enriched uranium has less than 20 percent U-235, and is most often used for nuclear reactor fuel in commercial power plants.

Lithium deuteride is a whitish salt made of one lithium atom and one deuterium atom (hydrogen-2).

A thermonuclear weapon is actually two bombs in one. Energy from the first explosion is absorbed by and “ignites” the lithium deuteride, leading to fusion – where two atoms combine – and creating a plasma many times hotter than the sun.

The process also creates a lot of neutrons. These bullet-like particles can then ram into and split a lot of nearby U-238 in the bomb, vastly multiplying the weapon’s destructive energy.

An SLBM is a nuclear-tipped rocket that shoots out of launch tubes in an underwater attack submarine.

Unlike most land-based missiles, SLBMs are mobile and very difficult to track. Some models can fly nearly 7,500 miles (12,000 kilometres), which is about 30 percent of Earth’s circumference. That’s plenty of range to strike any inland target from a coast.

Attack submarines that can launch ballistic missiles are known as SSBs or SSBNs. The “SS” stands for “submersible ship,” the “B” for ballistic” (as in ballistic missile), and the “N”, if present, means “nuclear” (as in powered by a nuclear reactor).

These vessels can stay underwater for 90 days and carry more than a dozen nuclear-warhead-tipped SLBMs – each of which can strike targets thousands of miles inland.

CVID is the strategy that was pursued in disarming Libya of its nuclear weapons. The Trump administration pursued it in initial talks with Kim Jong Un and North Korea.

The approach allows inspectors into a country to count weapons, witness their destruction, disable nuclear reactors, prevent the development of missiles, and perform other watchdog work.

Weapons experts think North Korea will reject CVID, mostly because it’d bar the use of nuclear reactors to produce energy and rule out the development of rockets, which can launch satellites and people into space.

Experts also point out that the strategy has a nasty historical precedent: Libyan ruler Muammar Gaddafi followed through on a US-led CVID program but ultimately ended up dead in the streets.

The Trump administration is reportedly changing its mind about CVID, though, and may push a plan that’s more acceptable to North Korea.

Deterrence is the idea that if countries have nuclear weapons, the threat of an overwhelming retaliation in response to an attack will keep the peace.

In 1995, a few years after the Cold War ended, Reagan-era government officials wrote:

It should ultimately create the fear of extinction – extinction of either the adversary’s leaders themselves or their national independence, or both.

Yet, there must always appear to be a ‘door to salvation’ open to them should they reverse course.”

Some nuclear weapons experts worry that deterrence will only keep the peace for so long. They also think belief in deterrence encourages the development and spread of nuclear weapons – so if and when nuclear conflict does break out, the catastrophe will be much worse.

The World’s Largest Active Volcano Is Erupting For The 1st Time in 38 Years
This May Be The Oldest Example of a Brain, And It’s Not What We Expected
‘Holdout Humans’: Chilling Glimpse Into Our Future if We Survive Another Million Years
Astronomers Spot The Biggest Galaxy Ever, And The Scale Will Break Your Brain
Hidden Chapel of Disemboweled Saint Found in The Old Lore of Westminster Abbey